The pandemic is motivating more Millennials to feel like they’re finally ready to buy a home. But do they have the savings to do it?

Seventy-four percent of Millennials — ages 25 to 40 — recently surveyed say they are interested in purchasing a home in the next 12 months. However, 88% say they have significantly less savings than would be needed to buy a $300,000 home with a 20% down payment, or $60,000. 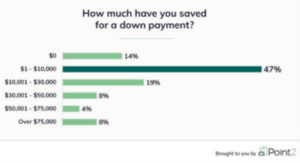 Fourteen percent of Millennials surveyed admit they have nothing saved for the purchase of a home.

Certainly, lower down payment programs exist. Whether these programs will be helpful for buyers whose savings are so limited is determined on a case by case basis. Down payments between 0% and 5% are possible with a home purchase, but these mortgage programs tend to cost more in the form of higher interest rates, and mortgage insurance premiums.

Forty percent of the Millennials surveyed say they set aside 10% or less of their income for a down payment. What’s more, 40% of respondents believe that $10,000 or less is enough to buy a home.

Seventy-six percent of Millennials in the study are looking for a detached home rather than a condo or townhome. Nineteen percent have their eye set on a home with more than 2,000 square feet, while 53% feel a home with 1001 – 2000 square feet will fit their needs.

If Millennial buyers are considering a down payment of 0%-5%, they may have a challenge finding homes for sale that are spacious enough to meet their demands with the amount of funds they have saved.

Those Millennials who hope to buy a home of their own may be able to save more as they move back in with their families. Young adults especially have moved in with family members as a result of the pandemic.

Call me for more information about opportunities to buy a home with a low down payment!

Buying a Home Young is the Key to Building Wealth

Homeowners who purchase their homes before the age of 35
are better prepared for retirement at age 60, according to a
new Urban Institute study. The organization surveyed adults
who turned 60 or 61 between 2003 and 2015 for their data
set.

“Today’s older adults became homeowners at a younger age than
today’s young adults. Half the older adults in our sample bought
their first house when they were between 25 and 34 years old, and
27 percent bought their first home before age 25.”

The study goes on to show the impact of purchasing a home
at an early age. Those who purchased their first homes when
they were younger than 25 had an average of $10,000 left on
their mortgage at age 60. The 50% of buyers who purchased
in their mid-twenties and early-30s had close to $50,000
left, but traditionally had purchased more expensive homes.

Many housing experts are concerned that the
homeownership rate amongst millennials, those 18-34, is
much lower than previous generations in the same age range.
The study results gave a great reason why this generation
should consider buying instead of signing a renewal on their
lease:

“As people age into retirement, they rely more heavily on
their wealth rather than their income to support their
lifestyles. Today’s young adults are failing to build housing
wealth, the largest single source of wealth, at the same rate as
previous generations.

While people make the choice to own or rent that suits them at a
given point, maybe more young adults should take into account the
long-term consequences of renting when home ownership is an
option.”

Bottom Line
If you are one of the many young people debating whether buying
a home this year is right for you, or you know a young person who
can benefit from buying their first home, contact me to explore
available options!

From housing inventory to price appreciation to generational shifts, look for real estate markets to “reshape” in 2018, according to the National Association of REALTORS®.

After three years of a shrinking supply of homes for sale, the realtor.com economists predict that the shortfall will finally ease up win the second half of 2018.

“The majority of the year should be challenging for most buyers. But we do expect growth in inventory in the fall,” says Danielle Hale, chief economist for realtor.com.

If housing inventory increases as predicted by fall, that will be the first net inventory gain since 2015.

Bullish construction is the engine that’s turning this ship around, bringing new home inventory to the market and creating opportunity for people to trade up into new homes.

But first time buyers may have to be patient for a while longer.

“Overall, prices are expected to increase, and we’re expecting to see more of that in lower-priced homes,” Hale says.

Along the Front Range, appreciation for homes priced above $750,000 will slow down while homes priced less than $500,000 will continue to see appreciation but not at the rate seen in recent years. This is due to the lack of supply (many builders are focusing on higher price point properties) and a large demand for real estate as a result of continued net migration.

Game-changer #2: Millennials starting to come into their own

The housing market in 2018 will continue to present challenges for millennials but there are some bright spots on the horizon.

Because of the strengthening economy and their developing careers, millennials are taking on larger mortgages and bypassing entry level homes.

As millennials reach their 20s to 30s when they’re settling down and starting families, they’re particularly motivated to buy. Millennials could make up 43% of home buyers taking out a mortgage by the end of 2018, up from an estimated 40% in 2017.

With mortgage rates expected to increase during 2018 due to stronger economic growth, millennials would be wise to buy sooner than later.

The new tax plan will change things up, in a nutshell causing short-term rates to rise more rapidly than anticipated as the Federal Reserve seeks to “get ahead” of possible inflation. The tax plan will also flood the market with a little more liquidity, keeping the economy moving at least another year.

Give our office a call to discuss your real estate plans for 2018! 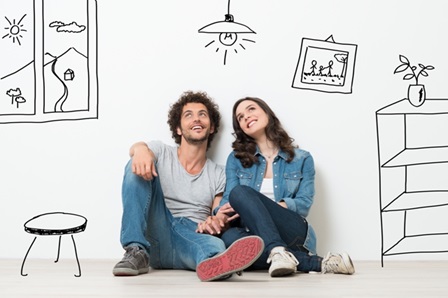 Most millennials dream of becoming homeowners one day. But a recent report shows that a majority of them haven’t saved anywhere near the amount necessary for a down payment, putting their homeownership dreams far into the future–and possibly out of reach.

About 80% of the younger generation hope to buy a home, according to the study from rental website Apartment List. But 36% of these wannabe homeowners plan to wait more than five years to take the plunge into homeownership.

That’s because home prices keep rising and most millennials simply don’t have the money for an onerous down payment. More than two-thirds of respondents don’t even have $1,000 in down payment savings.

The percentage of millennials planning to wait at least a half-decade spiked this year. In 2016, only 27% said they planned to wait more than five years. In 2015, the figure was 23%.

And in the latest survey, 67% believe it will take them at least three years to become homeowners while only 16% believe they’ll close on a home within two years.

“Millennials’ plans to purchase a home are being pushed further and further into the future,” says Apartment List data analyst Chris Salviati, one of the authors of the report. “That could have serious impacts on their long-term financial stability.”

Decades to Save Up for a Down Payment

In the priciest parts of the country, it might take aspiring homeowners two decades–or more– to come up with a 20% down payment.

Take San Jose, CA. Young buyers are expected to need at least 24 years to come up with 20% for a condo in the metro area. Twenty-four years!

The grim reality of sizable down payments isn’t much better in the metros of Austin, TX, and Los Angeles, where millennials will need nearly 21 years to save. The calculations include home price, income, and savings growth projections.

“A lot of college-educated millennials are still carrying a lot of student debt,” Salviati says. “To move to some of the best-paying jobs, millennials have to live in some of the most expensive cities. And throughout the country, increases in home prices are outpacing wage growth.”

When the hurdle of an initial down payment was reduced to 10%, just 1 in 3 millennials said they could come up with the needed down payment in five years or less.

However, it’s worth noting that many younger and first-time buyers put down considerably less than 20% or even 10%. Certain Federal Housing Administration–insured loans require only a 3.5% down payment.

Why are Millennials Waiting to Buy?

Coming up with the down payment was the biggest obstacle, at 53% followed by monthly payments (at 36%) and low credit scores (at 29%).

“They’ll continue renting longer into adulthood than we’ve seen in previous generations,” Salvaiti says. They might buy smaller homes or “migrate to areas where prices are more affordable.”

5 Surprising (and Useful!) Ways to Save for a Down Payment | houselogic.com

How to Best Save for a Down Payment on a House | moneyunder30.com

Many millennials are open to moving back to their parents’ houses after college. But for some, moving home may not be a viable option. This is leading recent college grads to a fork in the road: should I rent or should I buy? With renting costs continuing to rise, many recent graduates are deciding on the latter. Here is your unofficial guide to home buying!

What does the future hold?

It can be very daunting to map out the next 10 years of your life just as your tassel has been moved to the left. Impulsive decisions should be left in the dorm room and recent grads need to plan where and what they will be doing before considering buying property. Thinking like a real estate investor rather than making emotional or rash decisions can help guide the thought process.

Before college grads think about buying a home, they should have both a stable job and firm plans to live in the neighborhood for at least the next five years. If a recent grad is cemented and secure in their current location then they should talk to several mortgage lenders (starting with their bank) about their loan qualifications.

Buying your first home is a huge decision, so all the factors together can become overwhelming. However, if you are mentally prepared to take the journey then you need to be certain that your wallet can handle the weight as well.

Before you even think of picking up a pen and inking a deal for a mortgage, it’s important to be aware of your financial standing. With technology, budgeting has never been easier. There are a slew of apps for smart phones that are tailor-made for budgeting and planning your finances.

In addition to knowing the precise state of your finances, it is important to know your credit score — visit AnnualCreditReport.com. This is the only site that’s federally mandated and an authorized source for a free credit report.

Once you know your score you can decide what next steps. If it’s too low to even apply for a home loan (anything below 580), it’s time to get your credit in order. You should open up a credit card and pay it on time and stay on top of your student loans. Your mortgage lender can also help determine a course of action.

Many new buyers also don’t factor in the hidden costs of buying their first home. As well as the down payment on the property, there are also appraisal charges, closing costs, taxes, insurance and property inspection fees.

Much like school itself, the best thing a recent college graduate can do is their homework. As long as you think with a clear head and have a healthy financial standing, you could soon be hanging that fancy diploma in your very own home.

Give one of our agents a call if you or someone you know is contemplating their first home purchase!